Monica de la Cruz is the General Manager of AseTUB, the pipes group of ANAIP (Spanish association of plastics industry) representing the interests of the Spanish plastic pipes and fitting manufacturers.

With more than 20 years in the plastic pipes Industry, Monica is also the Chairlady of the European Standardization Committee CEN/TC 155 “Plastic Piping systems and Ducting Systems” and Vice-president of TEPPFA (The European Plastic Pipes and Fittings Association).

Prior to joining AseTUB, she worked for Great Lakes Chemical Corporation, one of the world’s leading producers of specialty chemicals used for polymers, which led her to live in Italy and Belgium. It is worth noting that she is co-inventor of 2 internationally patented light and thermal stabilising systems for PE films and PP fibres.

Monica holds a degree in macromolecular chemistry and petroleum derivatives and among others, a postgraduate degree in public affairs management and leads the implementation of the Operation Clean Sweep® program in Spain.

A field hockey player since a child, she is currently the captain of the Spanish O-45 Women’s Masters Team. 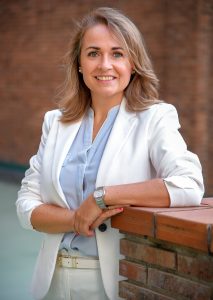